Komodo and Rinca are the two largest islands in Komodo National Park.  They are home to a plethora of wildlife, including komodo dragons, wild boars, monkeys, water buffalo, deer, flying foxes and hundreds of bird, lizard and snake species.

I’m going to preface this by saying that our experience was more of a nature walk than an actual hike.  In touristy places like Indonesia, there is a give and take – we took a leisurely 2-day boat tour of the islands, which allowed us to see a lot of the park, experience sunrise on Padar island, and snorkel with mantas in turquoise water.  The give was that we didn’t get as much time to explore Komodo and Rinca as I would have liked.

That being said, if you have more time and want to do a longer hike on Komodo, there are options for that!  My friend Ellie (author of yoginiwandering, a fabulous blog about her global adventures and time as a Peace Corps volunteer in Indonesia) was trying to figure out how we could stay longer on the island and still have time to do all the scuba diving we wanted… in the end scuba won out and we contented ourselves with quick tours of the dragon homesteads.

Our first stop on the 2-day tour was Rinca Island, the 2nd largest island in Komodo National Park.  My initial thought was that it was much more arid than I had envisioned; the short walk from the boat dock to the park employee housing basically took us through a large field of dry grass and dirt.  Around the raised houses (and under them, as they provided the most shade) there were monkeys, deer, water buffalo, aaaand – a komodo dragon!  The guide explained that she was a female and was “being lazy”, which I later realized meant “not moving because it’s hot out”.

Once everyone had gotten all their pictures, we continued our walk into a dry forest – komodo dragons tend to look exactly like logs on the ground, so about every five feet I would feel a surge of excitement, then disappointment, then excitement, then disappointment.  We came across some mounds of dirt with large holes in them, and the guide explained that komodo dragons lay their eggs in the holes and guard them until the rainy season.  Once the rain hits, it washes the smell away from the holes and komodo mommas can’t tell which nest is their, at which point they leave the eggs to hatch on their own.  Juvenile komodos live in the trees for the first few years of their lives, as they are the perfect snack for snakes, lizards, and other dragons.

As if to emphasize the point our guide was making, a young komodo wandered into the nests and began digging through the dirt, hoping to catch any late bloomers making their way out of the holes.

The rest of the walk was uneventful, but it was nice to stretch our legs and enjoy the scenery of the island.  We saw monkeys and fat little orange-footed pigeons, which ran around in the brush sounding very threatening until you saw their chubby black bodies streak through the dry grass.  Near the end of the walk I saw a wild boar and watched a water buffalo roll around in thick, sticky mud.  For a quick stop, Rinca was nice, and the guided tour was very informative!

We got to Komodo about 2 hours before sunset, which ended up working in our favor.  The dragons are most active in the morning and evenings, and on this particular evening we found seven of them hanging out at the watering hole before they found a place to bed down for the evening.

The differences in sizes and physique were amazing!  The youngest was a 5 year old male, who seemed content to hang out on the edge of the clearing.  In the bushes, barely visible was an older male, who the guide said was around 50 years old.  The stars of the show were the two largest dragons who sat close to the water.  One was a 45 year old male and the other a 27 year old female.  I guess it shouldn’t be a surprise but the younger female looked so much stronger than the male; her skin was tight over her muscles, where as with the 45 year old you could see his skin was starting to sag.  The guide said that they are like humans – they start shrinking after middle age. 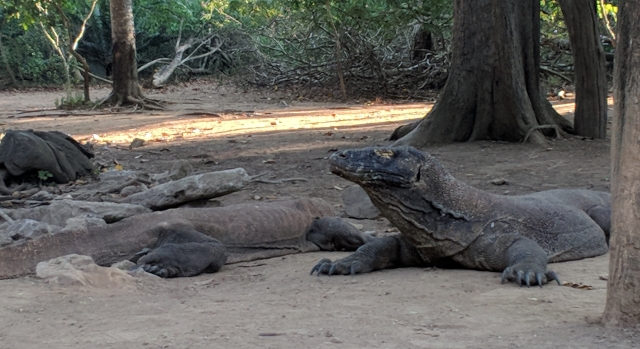 We watched that group for nearly 45 mins before continuing down the trail.  Again, we didn’t have time for a longer hike, but if we had I would have done the cloud forest trail (dubbed “the adventure trail” on the guide maps)  as it takes you up some pretty intense elevation change before opening into a dense forest that is perpetually swathed in fog.  That sounded like an amazing adventure, but I was very happy just seeing the komodo dragons and walking through the forest, knowing that even though we couldn’t see them, there were thousands more on the island.

We departed Komodo Island at sunset and were treated to a full blood moon as we made our way to the mooring spot for the evening.  It was a spectacular day and I went to bed knowing I could finally check “See komodo dragons” off of my bucketlist!