I was planning on making  this post a part of my Vacation Chronicles: Alaska series, but when I sat down to write it things got a little out of control.  We were only in the park for 1.5 days, they couldn’t have been that eventful right?  Wrong.  Denali is amazing.  I have never spent 8 hours on a bus and been excited to do it again, but the bus tour of Denali is a really great way to see a lot of wildlife and beautiful landscapes, and easy hiking around the visitors center meant we could explore some incredible mountain views with the whole family.

The Big Five is a reference to the five large mammals you might encounter while in Denali: moose, caribou, Dall sheep, grizzly bears, and wolves.  On the bus tour, we saw all five!

Moose was easy; we saw a cow and her two calves munching on tree branches right outside of the visitor center.

This was taken out of a bus window so it’s not the best pic, but you can see the mama moose to the left of the sign and one of her calves hidden in the bushes to the right.

Caribou were everywhere in the park, by far the most of any species we saw.  They seemed very at ease with the busses too, mostly staying in one place and munching grass as we drove by. 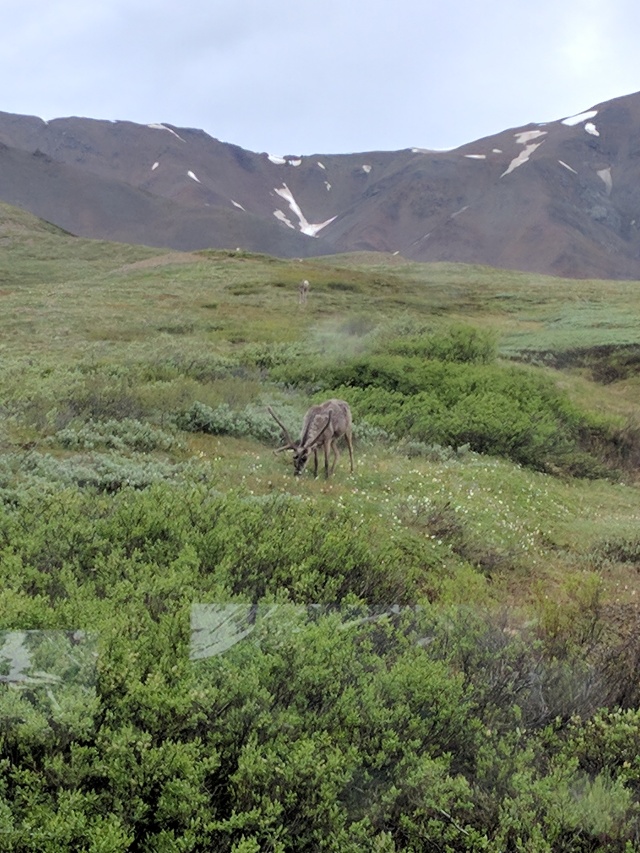 Dall sheep were difficult to spot as they tend to hang out on cliff faces that tower over the road.  Our sharp-eyed bus driver saw some waaaaaaaay up a mountain, and with some help from binoculars we were able to discern the fluffy white daredevils standing out against the rock face. 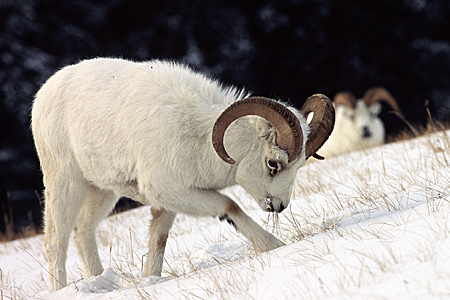 I didn’t actually get a picture of Dall sheep as they were so far away, but this is what they look like. (Photo Credit)

Grizzly bears were surprisingly easy to see!  All of them were far enough away that we needed binoculars to see them, but they were very active and it was fun to watch them lumber around the grassy plains of the park.  My favorite was a mama bear and her young cub, but we did see a young male taking a nap on a hill as well.

Nothing like a summer stroll to strengthen the bond between a mama and her cub.

Last but certainly not least: wolves (which were by far the coolest wildlife encounter we had).

On our way out of the park our hawk-eyed bus driver saw a grey wolf running at full speed down a dry river bed.  A couple of minutes later, three more wolves came running down the same way, prompting us to wonder if we were witnessing a wolf being run out of the pack.  About ten minutes down the road, we spotted a caribou walking slowly across a field; I could tell right away that something wasn’t quite right.  It wasn’t fully limping, but it wasn’t moving at top speed either, and that was the first time we had seen a caribou by itself.

We were sitting in the back of the bus so I didn’t see the wolf pass in front of our vehicle, but suddenly everyone got really quiet.  The caribou was on the other side of the plain and had all but disappeared over a hillside but the wolf kept a steady pace headed directly towards it.  We watched as it moved across the field, all of us silently waiting for the other wolves to catch up to their leader.  By now everyone knew what was going on and a morbid curiosity kept us there longer than any other wildlife encounter we had leading up to that point.

Warning: This video is disappointing and anti climactic, but you can see the wolf (tiny white dot) moving from the left side of the frame.

The wolf followed the caribou over the hill and that was the last we saw of it.  How’s that for an anti-climax?  I don’t know if I could have watched what I assume was a bad night for the caribou, but I do know that the entire bus ride back to the visitor center, “The Circle of Life” was playing over and over in my head.

I still have more to say about Denali, but in an effort to produce shorter posts, I’ll leave this one as is for now.  Thanks for reading!

One Comment on “Denali National Park: The Big Five”